Nintendo needs no introduction to the gaming industry. It competes with one of the major gaming franchises in the industry. Nintendo's journey started from producing cards to electronics and finally hitting the jackpot and becoming the globally recognized mega cooperation.

Initially, the Japanese company specialized in "Hanafuda'' (flower cards) Japanese playing cards in Kyoto. Nintendo was founded as an unlimited partnership, Yamauchi Nintendo & Co in 1889 by Fusajiro Yamusch and its name as we know it was adopted only in 1951. However, it wasn’t until the release of the Nintendo Entertainment System in 1985.

Since then, the company has released several members of the Nintendo game series. With the company's growth as a gaming franchise, there has been a lot of growth in the designing area as well.

In an interview, the former Nintendo of America President Reggie Fils-Aimé touched on the topic of insecurity that the brand faced in its early days. The creative team were ashamed that the company appealed to the young audience more. To combat this, several modifications were made to the logo to age it up. So let's see what the brand has gone through.

The first logo of Nintendo was crafted in the most minimalistic Japanese cultural sense. The first Nintendo logo featured a horizontally stretched rectangle in a light cream shade. Over the upper corner of the rectangles placed were two narrow red triangles. The bottom of the badge featured a bold blue Japanese letter which in English translate nin, ten, do. The insignia used to be placed directly on the Nintendo cards.

The 1950 monochrome badge was new on the table and it was clever. The brand placed an on spades hallmark over the wordmark. The spades symbol was further detailed with a light grey rectangular pattern and a stylized lowercase N placed inside a circle. This year the brand officially introduced the English translation into the logo.

Since the 1960's the brand shifted the identity to the logotype only. In the first year, the wordmark change was not drastic. Even tho, the typography was changed to a simple cursive logotype it resembled the previous wordmark for the audience. With some letter lines elongated and curved, the sleek inscription was written in black.

Between 1964 to 1967 the brand changed its logo four times. The first big colour and font transformation was made in 1964. The logo now was a white stylized inscription that is placed on a red background scarlet. The typography was in a Magneto typeface connected to the bottom.

Within a few months, Nintendo redesigned the logo again to change the attire back to black from red. The second logo of 1964 featured a logotype in black bold italicized sans serif typeface. With massive letters, the logo appeared delicate yet bold.

In 1965, the logo was redesigned twice again. The first redesign was based on a different version of the typeface. Here the brand was represented with the traditional sans serif typeface in all black capitals. The approach was very laconic and minimalist again portraying a simple yet professional logo.

Although, the first version of 1965 was great but it was redesigned later in the year and was out in the market by 1966. This time the logo featured a stylized monogram inside a thin circular frame. The colour palette chosen was red and white. This insignia brought a lot of significance to the brand with wordmark “n9”. 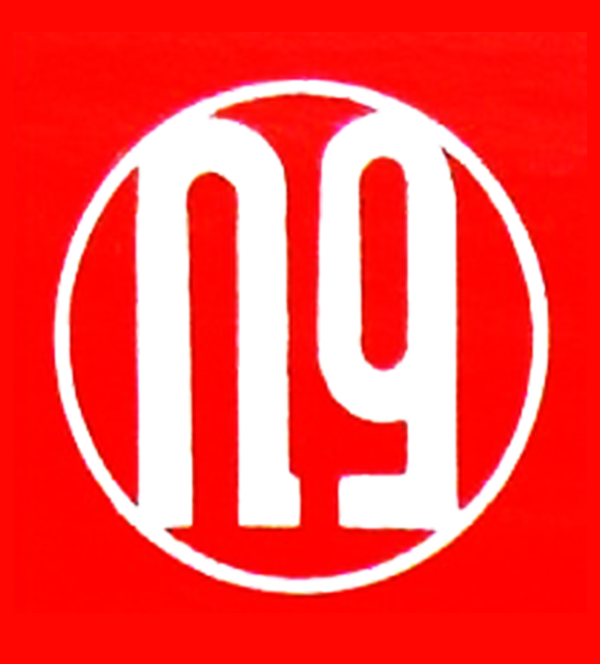 A year later in 1968, the logo was again fixed. In the 1968 version the bright red wordmark was guarded with a white hexagon badge outlined with bright red colour. The logo this year was particularly perceived as more vivid and passionate since the colour consistency was a bit brighter.

In 1970, the new modification included a change in shape. From the hexagon shape, it was converted into a red horizontal rounded bubble/ rectangle. The wordmark was placed inside with minimum negative space.

After five years of Nintendo in a rounded red bubble, the new logo was modified with the same design in black and the negative space inside was increased. The new logo apparently looked less congested than the previous one.

In the same year, the wordmark was again taken out of the bubble and the new modification consisted of a simple san serif wordmark in black.

In 1983 the logo was reverted back to the 1970 version of a wordmark in vertical round shape. The only modification made in the 1983 logo was that the overall appearance was made bolder with balanced negative space.

In 1983 the same logo was turned into a light grey shade. If you ask us, it was one of the worst colour palette choices in the series.

Finally, after 10 years of Nintendo in grey cloud, the Nintendo logo was redesigned. In 2016 the final logo was designed. The new logo had a couple of modifications. The red colour palette was brought back with white. The trademark and the round shape was also back in shade white which was bordered or inserted into a bright red rectangle. The wordmark remained in a san serif font.

Some Interesting Things From Nintendo Franchise

Donkey Kong invented jumping when Mario made his debut in Donkey Kong in the early 1980s by the name of "Jumpman. It was one of the first characters to ever actually jump up in a game.

Clever moves but Bushes and clouds are literally the same things in Super Mario Bros. Because of the limits of game memory back then led to several shortcuts in early Nintendo games.

Nintendo gave everyone a fair chance. Gunpei Yokoi was working maintenance on the assembly line in a Nintendo factory when Yamauchi noticed a toy that Yokoi had built which became the Ultra Hand, a best seller for the company. Later being a part of the design suite, he also introduced Game & Watch and Game Boy.

Nintendo phones would've been a game-changer. The idea was a Game Boy merged with a smartphone, like a Donkey Kong Mobile in your pocket.

Where in the beginning Nintendo was ashamed of attracting a young audience but throughout Nintendo, DS units have been sold more than iPhones or Game Boys.

The Nintendo logo has been a roller coaster ride but has finally completed its round. Today, the brand is globally recognized as the top gaming franchise with several launches. A brand that millennials and generation Z both associate with happy memories.

Now, you must be thinking that it is always advised against redesigning a look in such short intervals. Yes! It certainly is, however in the late ’80s ’90s the companies didn't face heavy criticism for the redesigning. Secondly, the reason that Nintendo survived redesigning in short intervals is that Nintendo typeface from 1965 till 2016 remained the same more or less, which gave the brand the benefit of recognition. During these, the brand did play with the colors and the density of the typeface but kept it recognizable.

We are glad that in the modern digital era, Nintendo has finalized the logo and has kept it for 5 years in a row now.

Gary Roberts is a digital marketer. He loves to blog about digital marketing, designing, and business growth. A true lover of Coffee with chocolate cakes!

Your email address will not be published. Required fields are marked *

Waiting to welcome you to our amazing family of loyal customers and are excited to work with you.